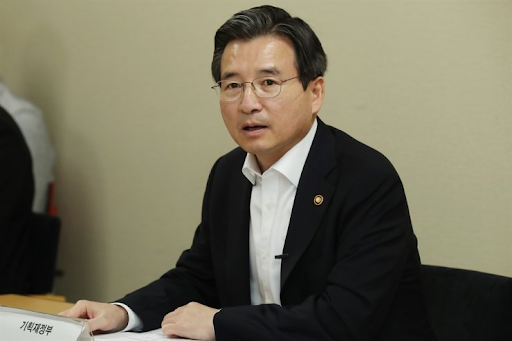 Hashed, the South Korean blockchain investment firm, has scored a coup with the appointment of the country’s former First Vice Minister of Economy and Finance. Kim Yong-beom joins Hashed Open Research, an offshoot of Hashed that’s focused on exploring applications for blockchain technology.

The appointment of Yong-beom to Hashed Open Research is one of the clearest signals yet of the Korean government’s receptiveness to crypto and blockchain, which is welcomed with enthusiasm, rather than the suspicion that characterizes many western nations.

Kim Yong-beom carries some clout in his homeland on account of the high profile ministerial role he held. He is expected to leverage his extensive political connections to advance the adoption of blockchain, both domestically and abroad. It is believed that at Hashed Open Research Yong-beom will act as a liaison between the crypto industry and the Korean government.

While technically working on behalf of the industry at large, Yong-beom’s posting will undoubtedly be of benefit to Hashed, the venture capital firm focused on early stage web3 startups. The company, led by founder Simon Kim, operates dual headquarters out of Seoul and Silicon Valley. It’s invested in the likes of metaverse project The Sandbox, whose virtual land parcels have been snapped up by major brands. Other projects to make the Hashed portfolio include Aptos, the forthcoming layer-1 blockchain that’s attracting a lot of hype, and Klatytn, the EVM chain that’s big in its native Korea.

Kim Yong-beom is firmly in favor of strengthening US and South Korean ties. “Korea can potentially become a G2 nation with the US in the digital sector if proper regulations are billed and applied,” he ventured, noting how Korea already boasts “the world’s highest 5G penetration rate, startup companies’ software technology, the world’s fourth-largest online game market size, and K-content power.”

It’s become commonplace to see government ministers tasked with regulating crypto change sides, once out of office, and take up ambassadorial blockchain roles. On Wednesday, former US SEC chair Jay Clayton was named an advisor of Electric Capital, the crypto VC that’s raised $1 billion for industry investment. Clayton is also an advisor to crypto custody firm Fireblocks and to crypto fund One River Asset Management.

Kim Yong-beom claims to have first encountered Hashed at Korea Blockchain Week and been impressed with the firm’s efforts to boost blockchain adoption in Silicon Valley, Bangalore, and Singapore. There is already a favorable wind blowing through South Korea, whose government is prioritizing light touch regulation for the blockchain industry.

It was an honor to meet former First Vice Minister Kim Yongbeom of the Korea Ministry of Economy & Strategy. I appreciated his insights on innovation & economic growth. Thank you! @hashed_official @Unopnd_Official #CFTC @CFTCpham pic.twitter.com/5rFSQOq2y9

The former First Vice Minister of Economy and Finance will be looking to support dialogue between industry leaders and senior government officials as part of the rollout of the Regulation for Basic Digital Assets bill. In addition, predicts Yong-beom, “we will research the possibilities and limitations of digital technology extensively, not limited to blockchain, to find ways how digital technology can be used to make a better society.”

Disclaimer: This article is provided for informational purposes only. It is not offered or intended to be used as legal, tax, investment, financial, or other advice

How laws for digital assets changed in 2022